The Day of the Do-Over: What If Your Teenage Son Wanted To Work At A Bank As A Donor? 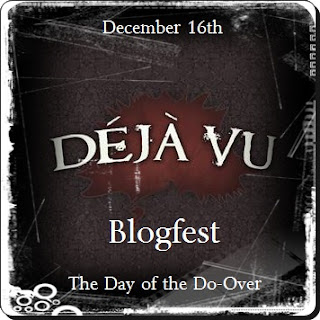 DL Hammons, Nicole Ducleroir, Lydia Kang, and Katie Mills are hosting the Deja Vu Blogfest
where writers are asked to "re-post their favorite blog offering, or one that never received the exposure it should have." Be sure to check out  the list of entertaining entries who are getting into the holiday spirit by highlighting their favorite repeats.

My story was written last February, a little over a month after Empty Nest Insider began. Thanks to DL, Nicole, Lydia, and Katie, for inspiring me to dust it off.


What If  Your Teenage Son Wanted To Work At A Bank As A Donor?

Over the weekend we were trying to find a good movie, and came across a review for The Kids Are All Right; a story about a lesbian couple's teenage children who decide to find their biological father. Though one of the leads, Annette Bening is up for an Oscar for best actress, the movie wasn't playing in any theaters, but a slightly different version started playing in my imagination. My story takes place before the children in the movie were conceived. Think of it as a prequel to The Kids Are All Right from a mother's perspective.

The story begins when 19 year old  Paul arrives home from college for spring break. He is filled with angst as he is dreading spending his vacation with his family instead of being crammed in a crummy hotel room with 8 of his buddies at a rundown beach resort. Though he is incredibly angry, he is blessed with thick, wavy brown hair and looks like a young Mark Ruffalo (the biological father in the movie). Then his mother, brilliantly portrayed by Susan Sarandon (only because she must be kicking herself for not getting the award winning role of the mother in The Fighter) walks into his room and tells him to stop sulking and start looking for a summer job before all the good ones are snatched up. After a series of failed interviews at various establishments around town, he decides to embark on another career.

The next day young Paul sees an ad that offers a way to earn easy money while still being able to stay out all night and sleep until the middle of the afternoon. After filling out a detailed family history, going on an extensive interview, and submitting samples of his work, he would find out if he was a candidate for the job.  His mother was quite excited that her lazy son was suddenly so enthusiastic about finding employment until she comes across one of his work samples in the refrigerator.

When she asks him about what's in the container, he explains that the bank does drug tests on all of their employees. Then she smiles at the thought of her son working at a bank, but realizes that he has no experience and wouldn't be working bankers' hours. When she questions him, he tells her that he is applying for a special internship where he would be working from home and would just drop off deposits every once in a while. After he leaves for his interview, she starts rummaging through his things when she sees the ad for the sperm bank buried under a huge pile of dirty laundry.

The next scene is Black Swan meets Diary of a Mad Housewife when the mother is screaming madly, yet dancing divinely around the house looking for clues to why her son would do this to her. She is dancing on her tippy toes to avoid stepping in any remnants of work samples. Flashbacks of Paul's innocent childhood appear on the screen. All the years she spent yelling at him for forgetting his homework and spilling food all over the kitchen floor; reminding him to wash his hands after he went to the bathroom, a week before he graduated from high school. His mother remembers that even as a little boy, Paul loved to take over the house scattering little pieces everywhere he went. Suddenly, she springs up on the table like a cat, wondering if there was any safe surface in the house that wasn't turned into a science lab.

Later when Paul returns home from his physical/interview, his mom takes another swig of cooking sherry and calmly asks him to sit down. She unties her apron, gently wipes the kitchen chair off with a rag before she tosses it into the fireplace and joins him for a meaningful discussion. Careful to mind her tone, she inquires if they mentioned anything about providing a company car as her chassis is prone to bumps. She also tells him that she found out that several of the bank employees were coming down with carpal tunnel syndrome and it would behoove him to find something less debilitating that he could put on his resume.

Then he smiles and says that they told him to apply again after he graduates from college. Tears of joy stream down his mother's face as she asks, "Why don't you seem disappointed?"  Then he replies, "I decided I wasn't interested after they told me I'd have to give up alcohol." With that his mother puts her dishwashing gloves back on, and gives her boy a big, warm hug.  Fade to black.
Posted by Empty Nest Insider at 11:51 PM