Get Fired Up Blogfest! 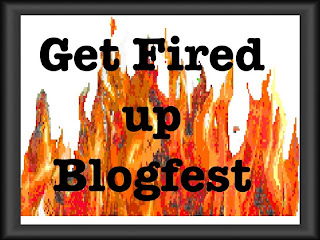 Melissa Sugar from Have You Heard is hosting the Get Fired Up Blogfest to encourage bloggers to help others receive the recognition they deserve. After we've successfully given a new blogger all our experience has to offer, we are to post about it today. Suddenly, I'm transported back in college with my number two pencil and blank blue book, about to take a final in a class I've never even gone to before.
I tried doing the assignment by following new bloggers. Some had less followers than I did, while others had only been blogging for a few months and already had more than double. I still tried to be friendly and supportive, but I didn't exactly do any extra credit. I wish I could say that I helped someone write with more feeling, comment with more flavor, or eat with more fiber.
Rather than receive an Incomplete, I would like to try to redeem myself by writing about someone who helped me "Get Fired Up"  when I first started blogging.  It was around this time last year when Rhonda at Laugh- Quotes and Kibitz Spot suggested that I sign up for the A to Z April Blogging Challenge.

When someone has a tagline that reads, "Laughing Around The Globe," you know that you'll have fun cheering each other on. Since I had only been blogging for a short time, I was nervous about having to come up with a topic beginning with a different letter of the alphabet everyday except Sundays* for an entire month. Immediately after I signed up, host Arlee Bird welcomed me along with the co-hosts. Some of the other fellow participants also started following me before the challenge even began.

All of my fears subsided and new friendships were formed. On the first day we posted about everything from A is for Ant to Antidisestablishmentarianism. I went into A to Z expecting a blogging boot camp, and was thrilled to meet a friendly community of supportive bloggers. I also gained more than 50 followers, while some gained over 100.

Now I'm really looking forward to seeing the gang again this year. It will be even better than a high school reunion, because I don't have to worry about squeezing into a dress. There's still time to sign up, and the goal is to have 1000 participants by the end of today. The 2012 A to Z Blogging Challenge  starts one month from now on April 1st, so you can schedule your posts ahead or take it one day at a time.
Thanks to Melissa who created the Get Fired Up Blogfest in the tradition of  "Pay It Forward."  Now it's my turn to point all of you in the right direction, and up to you to make the most of it.
*April 1st is the only Sunday post
Posted by Empty Nest Insider at 2:57 AM

Email ThisBlogThis!Share to TwitterShare to FacebookShare to Pinterest
Labels: Arlee Bird, Blogging From A to Z Challenge, Get Fired Up Blogfest, Melissa Sugar