Survive and Thrive Bloghop: A Nose For Trouble 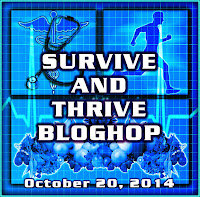 Alex J. Cavanaugh,  Michael Di Gesu,  Stephen Tremp, and  L. Diane Wolfe are hosting the Survive and Thrive Bloghop to create awareness, and encourage early screenings for disease prevention. Please visit our wonderful hosts to read their amazing stories, as well as the rest of the talented participants. Below is my contribution.

A Nose For Trouble

I'll never forget my childhood days of summer. We'd spend hours soaking up the sun in our backyard. Before anyone even heard about tanning beds, my mom had her own outdoor version. It was an inflatable raft that she filled up with water. Because it was silver, it was comparable to baking in a large tinfoil reflective pool. Somehow my mom came out perfectly bronzed without a hair out of place, while I turned beet red.

When tanning beds first came out, I was one of the first people to line up. In a half hour, I could evenly cook my front and back without burning. How could it possibly be harmful?  If only we had known about the dangerous effects of all types of sun bathing.

During a routine dermatologist visit several years ago, my doctor noticed a suspicious mark on my nose. He thought it was a basal cell, and suggested I have it removed by a plastic surgeon to avoid scarring. Two questions immediately came to mind, "Are you going to do a biopsy, and should I meet with the plastic surgeon before the procedure?"  Because this dermatologist had been treating my family for many years, I didn't argue with him when he answered "no" to both of my questions. Big mistake.

After my procedure, the plastic surgeon sent a biopsy to the lab. Instead of a cancerous basal cell, it was just a gland. The procedure was a complete waste of time and money, which could've been avoided if I would've followed my instincts.

As a fair-skinned blond, I'm always prone to blotches and blemishes. Seven years later, I noticed a recurring blemish that appeared near the area of the botched surgery on my nose. It would turn crusty, and reappear every few months. I made an appointment with my new dermatologist who immediately took a biopsy. This time I had a confirmed basal cell, but the location was even trickier to get to, and there was no telling how deep it went. For those reasons, my doctor referred me to a Mohs surgeon.

According to Mayo Clinic, "During Mohs surgery, layers of cancer-containing skin are progressively removed and examined until only cancer-free tissue remains." When I arrived, the nurse told me how fortunate I was that the cancer didn't spread to my left eye.

After each layer, they sent me back to the waiting room, so they could examine it. My husband kept me company until they called me back in for the next round. As a result of the prior needless surgery, I had extra scar tissue, so the surgeon took a skin graft from behind my left ear. It took six attempts until the surgery was complete. I asked if that was a common number, and the nurse said that it took one of her patients sixteen attempts to remove all of her cancerous layers.

Now I try not to be in the sun during the peak hours of 10 a.m. to 2 p.m., and wear sunblock or a moisturizing lotion with SPF 30 or higher. As my scar was healing, it looked like some of the sutures were popping out, so I immediately went to the doctor's office.  One suture looked particularly long, as I was able to wrap it around my finger. After the nurse examined me, she fought hard to keep a straight face. Then she relayed her findings, "Those aren't sutures. They're hairs. We deliberately took the skin graft from behind your ear, because most people don't grow hair back there." Now there's something I could be proud of for finally coming in first.

Posted by Empty Nest Insider at 12:07 AM