IWSG: When Characters Fall Out Of The Sky 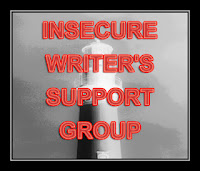 It's time for another addition of  Alex J. Cavanaugh's Insecure Writer's Support Group. Be sure to visit the diversely talented members who will welcome you with open arms. The following is a repost from last spring.

The night before our flight home from Israel, we upgraded our seats to the exit aisle. Since we had to leave for the airport early in the morning with only a few hours sleep, we both took turns dozing off on the flight. Shortly after, the first character from another dimension appeared.

The exit aisle was located next to the restroom. Though I was too far away to see if the "Vacant" or "Occupied" sign was on, the man's body language led me to believe that he was first in line. He started swaying back and forth doing the "potty dance." This dance occurs at an early age when children are having so much fun playing outside that they hold it in until the last minute. This results into spastic convulsions in a panic to race home to the bathroom. Sadly, this condition often begins to reappear in middle-age, and can be set-off with as little as a cup of coffee.
As time passed, he decided to turn our little exit corner into his own personal gym. He did a series of exercises from running in place to a complete stretching routine. I was looking forward to getting back to my book, when the next character appeared.
This man was in his late sixties, and enjoyed shuffling between the galley, and the restroom. He acted like an overserved patron at a singles bar. While nursing a cup of water, he unabashedly flirted with a pretty, young woman as she waited to use the restroom. When he ran out of people to bother, he eventually used the facilities himself. Afterward, he slid into our exit corner to tuck in his shirt, zip up his fly, and buckle his belt. It was almost as if he thought he was entering a fifth wall where no one would be able to see him. If only he had been invisible, then we wouldn't have had to see his Howard Hughes toenail peeking through the hole in his sock. For all of the rules on airlines, not being allowed to take your shoes off should be one of them.

I began to doze off again, and awoke to a crowd full of people. Suddenly, our little corner was converted into a cozy comedy club. A group of men were laughing it up before their wives came to spoil their fun. Each of the three wives looked like one of Cinderella's wicked stepsisters, while each of the husbands looked like they wanted to find another hideout.
Then I started wondering what they thought about me. Did they catch me sleeping with my mouth open? Was I covered in crumbs from the tasteless lunch? Could they see that I ran out of clean socks, and was wearing navy tweed with black pants? Of course my shoes never left my feet, as I follow my own rules.
If the first character was The Gym Rat, the second Herbert The Pervert, the third Cinderella's Steps and Their Fellas, who would I be? Just a pale observer of unsavory characters, who looked like she could've been traveling from Wisconsin instead of a very warm climate from halfway around the world. Whoever said that you had to look out the window to see interesting sights?