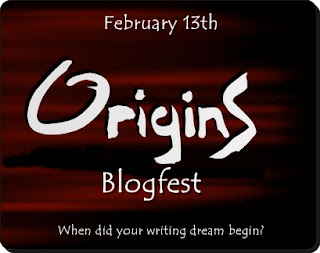 DL Hammons, Alex J. Cavanaugh, Katie Mills (Creepy Query Girl) and Matthew MacNish (The QQQE) are hosting the Origins Blogfest where writers share their stories behind what inspired them to become writers in the first place.  Please be sure  to visit the Origins of the many talented authors and bloggers.

I began blogging a little over a year ago when both of our sons were away at school, and we were officially empty nesters. This was a perfect opportunity to be heard, without the shock of being seen in my pajamas. Through blogging I could connect with the outside world before I brushed my teeth in the morning, and after I finished flossing at night. This enabled me to still spend quality TV time with my husband,  as well as, having an outlet to temporarily distract me from missing my children. In the meantime, I got back in touch with  a few old friends who actually read my blogs on Facebook; although, I had hoped to reach my second grade teacher.

I'll never forget the assignment to write a story about my best friend. While most students were writing about other classmates, I decided to write a story about my mom. I wrote about all of the fun things we did together including our special "girls day" in Disneyland where we went on the Mad Tea Party, and It's a Small World  rides, while my dad and brother went to an All-Star Game.

I really don't remember which other activities I included in the story, but I just enjoyed spending time with my mom. Whether it was going shopping, playing Barbies, or going to the movies, we always had fun; unless I got punished for crying for no reason.

After the papers were graded, my teacher read my story to the class, and I wasn't the least bit embarrassed that everyone else wrote about having real friends. She even told my parents at the open house what an accomplished writer I was for a seven-year-old. That was probably the first time that I was told I was actually good at something, aside from cleaning my plate.

I continued writing throughout grammar school, high school and even college. In high school my parents bought me a portable electric typewriter which was also a great gift to my teachers. Now they no longer had to endure deciphering  my smeared lefty cursive prose. I always enjoyed the exhilaration that came from playing with words, and attaching meaning to them. The ability to evoke a wide range of emotions, made me feel empowered; yet I chose to play it safe with a dependable job that included writing letters instead of stories.

Decades later at a special birthday party for my mom, I mentioned my gold star paper in a toast. I said that she was still my best friend, and even though she managed to save her TV Guide collection from 1972, my touching second grade story about her somehow went missing.  Then she looked up at me, and marvelled at how well I cleaned my plate.