The Storm of the Century


In case you've been living under a rock, I'm pleased to announce that CassaStorm, the final installment of Alex J. Cavanaugh's thrilling space opera trilogy is finally here. Since Alex gave everyone the opportunity to ask a question, I decided to delve deep into uncharted territory.

I asked him what his middle initial "J." stood for. Surely his explanation would  reveal what drove him to become an award winning author, mentor, friend, and leader of the blogging community. It would also explain his love of science fiction. Just as I was about to introduce Alex "Jedi" Cavanaugh, he unveiled his middle name as "Joseph." Then it all started to make sense. The soundtrack from Joseph and the Amazing Technicolor Dreamcoat began playing in my mind. Alex is all about making the author's and insecure writer's dreams come true. He also never leaves his followers starving for attention


CassaStorm
By Alex J.  Cavanaugh
From the Amazon Best Selling Series!
A storm gathers across the galaxy… 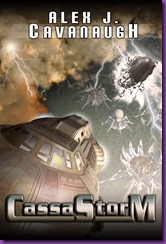 Commanding the Cassan base on Tgren, Byron thought he’d put the days of battle behind him. As a galaxy-wide war encroaches upon the desert planet, Byron’s ideal life is threatened and he’s caught between the Tgrens and the Cassans.

After enemy ships attack the desert planet, Byron discovers another battle within his own family. The declaration of war between all ten races triggers nightmares in his son, threatening to destroy the boy’s mind.

Meanwhile the ancient alien ship is transmitting a code that might signal the end of all life in the galaxy. And the mysterious probe that almost destroyed Tgren twenty years ago could return. As his world begins to crumble, Byron suspects a connection. The storm is about to break, and Byron is caught in the middle…

“With a talent for worldbuilding and a compelling cast of characters, Alex J. Cavanaugh combines high powered space battles and the challenges of family dynamics to provide readers a space opera with heart.”
- Elizabeth S. Craig, author of the Southern Quilting and Myrtle Clover mysteries

“I thought the revelation was going to be one thing and I was completely wrong … CassaStorm pushes the limits…”
- Tyson Mauermann, Speculative Reviews

“…mesmerizing story of survival, personal sacrifice, tolerance, and compassion. It’s a rare jewel that successfully utilizes both character and plot to tell a story of such immense scope and intimate passion…” - Nancy S. Thompson, author of The Mistaken

Alex J. Cavanaugh has a Bachelor of Fine Arts degree and works in web design and graphics. He is experienced in technical editing and worked with an adult literacy program for several years. A fan of all things science fiction, his interests range from books and movies to music and games. Online he is the Ninja Captain and founder of the Insecure Writer’s Support Group. The author of the Amazon bestsellers, CassaStar and CassaFire, he lives in the Carolinas with his wife.

Posted by Empty Nest Insider at 12:16 AM