The Road To Graduation 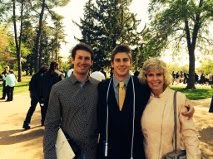 Nowadays, so many students are on the five year plus plan for college graduation. Fortunately, both of our sons took the standard four year route, and we were thrilled to celebrate with our younger son last weekend. Our road trip to the ceremony was almost as challenging as his college courses.

Last December, I invited my mom to join us after we made the hotel reservations. Though we booked three rooms over five months in advance, we still had to stay about thirty minutes away from campus. Initially my mom was sure that she would "ruin my time," and declined the offer. We continued to hold onto our rooms, in the hope that she would change her mind.

Later, when both of our boys told her how much they wanted her to come she replied, "I'll think about it." After her hair stylist agreed to take her a day early, the plans were set. Now the next step was to find the proper vehicle to transport six passengers, and my mom's luggage for a ten day stay on an overnight trip.

Once again, my hubby was in full research mode. Though my car seats six comfortably, there wouldn't have been enough room for our bags, plus my mom's walker and wheelchair. We decided on a Ford Expedition SUV which seats eight, and barely had room to spare.

The seating arrangement was as follows: I was in the front seat with hubby, my mom and her caregiver were in the middle, and my brother and older son were in the way-back. Because the truck was so long, the passengers in the middle seat couldn't hear what the front seat was saying, the backseat couldn't hear what the front seat was saying, and no one could hear what my mom was saying in the middle seat, as she's such a low talker. We spent the majority of the four hour drive saying, "Huh, what, and can you repeat that?" Though my son and his uncle were off in their own little world in the way-back talking about everything under the sun. I tried to use my superior hearing skills, and booming baritone voice to translate for everyone, but even my powers succumbed to my husband's tin ear, and lead foot.

That night we took our grad out for a delicious Italian dinner. My dear friend from college was also there celebrating with her daughter. It seemed like only yesterday when our son took a bite out of her daughter's cheek at his second birthday at Chuck E. Cheese, and now they were graduating college together.

The next morning, my prince of a husband got up early to make a bakery run. Then he personally delivered muffins, bagels, and orange juice. When he reached my mom's room, he rang the bell, and set off flashing lights. This startled my mom and her caregiver. She thought that this was some kind of hotel emergency warning. I told her that it must have been a special system to notify a hearing impaired person that someone was at the door. It made sense that this was featured in a handicapped room. It's amazing how you just become drunk with knowledge in a college town.

Instead of being announced in alphabetical order, the graduates received their empty diploma cases, according to where they were seated. This made it difficult to gauge when to take a bathroom break, but we all managed to hear our boy's name called. Later when we dropped him off at his lovely house, his friends were in mid-celebration on the front porch. They all called out his name, and greeted him with a big round of applause.

I could've written about how hard our son worked, and how he never gave up. Though when he looks back on this day, he'll remember how happy he was that Nana and Unc came to see him, and that his friends cheered him on, no matter how drunk with knowledge he was, after we left. 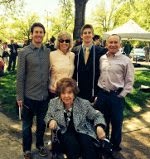 Posted by Empty Nest Insider at 12:10 AM