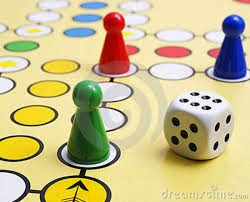 Do you ever notice how some people can't go one minute without bragging? They start at a young age, and every conversation turns into a competition. They go to the best schools, graduate with the best jobs, marry the best spouses, and move into the best homes.

After their gorgeous and gifted children move away, they come to the realization that they have very little to talk about. They're at that awkward age where their bodies are creaking, and their weight is shifting in the wrong places. Trapped in middle-aged limbo: too young for retirement, yet too old to sit in a chair without dozing off. If only they had grandchildren to bounce on their knees before arthritis kicks in. Here they are, a group of friends gathered around the picnic table bundled up in blankets beside a roaring fire on a balmy summer evening playing the latest board game.

It's Toots and Bladders, Battered Hip, and Crazy Mates all rolled into one: the game where it pays to decay. A player draws the first card which asks, "Have you ever had a cyst lanced from your perineum?"  Raymond answers "yes," collects $200, and advances his miniature oxygen tank down the board.  Pearl throws the dice, and lands on Constipation Blvd. Everyone presses the buzzers at once. To break the four-way tie Lexi shouts out, "How long has it been?"  Pearl answers "five days," Raymond three, Lexi two, and Leonard adds, "since lunchtime."


When Leonard proudly admits to having hair plugs he is forced to move his miniature enema kit into the Unnecessary Cosmetic Procedure Pavilion forfeiting his next turn. Now the competition has shifted from earlier conversations about material possessions to who has the largest surgical scars.  The couples are thrilled to have something to talk about, even if it means battling it out to see who has suffered the most. Lexi draws the final card which reads, "Congratulations on your fifth anniversary of being cancer-free..." Lexi can't believe that her husband and closest friends remembered it has been almost five years to the day since she underwent her last radiation treatment for breast cancer. She is so excited that they went to all the trouble of ordering a customized version of the game just for her. Then she reads the rest of the card, "...and your mother-in-law will be joining in the celebration tomorrow, when she moves in with you after her hip replacement surgery." With that everyone turns their winnings over to Lexi, right after prying her hands off of Leonard's hair plugs.