IWSG: More Than Just A Guide 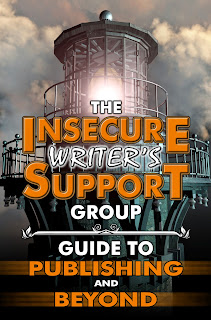 Thanks to  Alex J. Cavanaugh, and his round-the-clock team of administrators, The IWSG Guide To Publishing And Beyond is here! I'm honored to be a part of this group that has been growing for three years strong, as well as a contributor to this helpful guide. You can download it at:  Amazon, Barnes and Noble,  Kobo, Smashwords, and  Goodreads.

Alex decided to take the IWSG to the next level with this wonderful guide to help writers attain their goals whether they're just starting out, or want to strengthen their marketing skills for their next book. Since this will be the last IWSG post for 2014, it's made me reflect on how I've gone from an insecure blogger to an insecure writer, and how this group helped me along the way.

According to Mari Kane from Blogsite Studio, there are "Five Big Differences Between Writing and Blogging." The observation that most struck a chord was how, "Blog readers like to skim, not chew."

The same could be said about many professions in our fast-paced society. Many people spend the day rushing from one meeting to another, barely making time to sit down for a meal. It's not unusual for parents to train their children at an early age to have every hour scheduled throughout the day. I knew one mother of three who kept a port-a-potty in her mini-van, so she wouldn't have to pull over when she was transporting her children from one activity to another.

Our attention spans are getting shorter, and action movies are more popular than ever. Even PBS classics like Downton Abbey have been known to cut quickly from one scene to another. Though you may find a lengthy soliloquy in a stage performance, Maggie Smith's elderly character The Dowager, is more likely to engage in a pithy punchline like, "What is a weekend?"

Some blogs are informative, while others are entertaining. Like the most successful writers, the best bloggers have the ability to do both, but it doesn't end there. Mix in loyalty, compassion, and a healthy dose of encouragement, and you have the Insecure Writer's Support Group. We may still be insecure next year, but thanks to Alex J. Cavanaugh, insecurity is the new black.

Email ThisBlogThis!Share to TwitterShare to FacebookShare to Pinterest
Labels: Alex J. Cavanaugh, Bloggers vs. writers, IWSG, The Insecure Writer's Support Group Guide To Publishing and Beyond