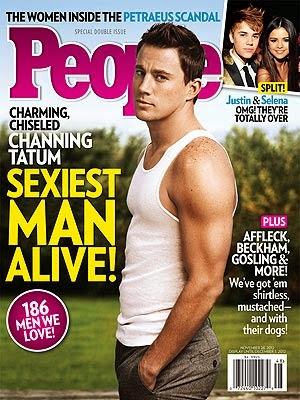 As I was perusing People Magazine's Sexiest Man Alive issue, I thought about how my definition of sexy has changed over the years. Though Channing Tatum looks great with his shirt off and is an amazing dancer, I don't know if he has what it takes to top my list. Sure he would be delicious arm candy, but would he ever stop doing push-ups long enough to give me what I really need?
While most of the buff men in the issue pump iron, I get steamy watching my husband iron his shirts. Instead of texting naughty messages like many celebrities do, my husband prefers a more personal approach. He lets me have a front row seat while he's cursing at bad drivers.
Lately, I've found that simple sayings are music to my ears. Some of my favorites include:

And my all time favorite is when he's telling our boys:


Men who cook are incredibly sexy. My husband is master of the grill, and even our friends delight in watching him barbecue. Whether he's adding marinade, inserting timers, or slicing with the precision of a Samurai Warrior, it's always a treat to see him in action. My dad was known for his special London broil, and my husband has continued the tradition. Our sons are currently in training.

Some of our neighbors could also be in the running for Sexiest Man Alive. There's Devin who's either outside mowing the lawn, raking the leaves, or shoveling the snow. He's always quick to smile and wave no matter how inclement the weather.  Stan drives carpool, and even packs his kids' lunches. Good neighbor Ted leads a dog walking group with other moms. He also volunteers at the local school, while his boys are off at college. I've never seen any of these men without their shirts on, and I prefer it that way.

Posted by Empty Nest Insider at 12:36 AM