From The Western Mediterranean To My Mother-In-Law's


Before our younger son was born, my in-laws moved to Israel to be close to my mother-in-law's family. My delightful father-in-law who always had a smile on his face despite having his whole world torn out from under him during the Holocaust, died less than a year later.  This was more than twenty years ago, and though my husband has taken my boys, I had never gone with them.

My first visit was a year after I graduated from college, as part of a tour group. I was the youngest person in the group, and my mother was the second youngest. One of the highlights was climbing Masada arm in arm with a rambunctious 80 year old fellow traveler.

After we drove our son to college, my husband asked me if I would go with him to see his mother. I told him that I would like to stop off somewhere along the way to break up the 14 hour flight from Chicago. He said to do some research, and added that he wanted to leave as soon as possible. When I told a friend that I was having trouble choosing between Italy, France, and Spain, she suggested that I book a cruise. Because the trip was only a few weeks away, I was able to find an exceptional deal on a cruise to Rome, Genoa, Cannes, Corsica and Barcelona. The ship returned to Rome and from there we were scheduled to fly to Tel Aviv. I was thrilled, my husband was thrilled, and my mother-in-law didn't complain, so all was well.

The ship departed from Rome, so we went off on a tour straight from the airport. We saw the Colosseum, The Spanish Steps, and St. Peter's in Vatican City. We dined on world famous gelato and threw coins into the Trevi Fountain where Audrey Hepburn and Gregory Peck once stood. We covered a lot of the Eternal City in a few hours, and then we were off to the ship.

The next day, we accidentally walked up to the house where  Columbus was born in Genoa on our own leisurely tour. The rooms were very tiny, and a model of the Santa Maria was encased on one of the shelves. Another highlight was seeing Napoleon's home in Corsica. The Corsicans that we encountered were not very receptive to our restroom requests, so I found myself sneaking into a restaurant. The hostess followed me in and shouted in a thick French accent, "You didn't ask permission!" Then I retorted with, "Emergency, emergency!" She got the message, and walked out. I always had a gift with languages.

We loved being able to relax in the comfort of the ship where the food was tasty and plentiful, everyone spoke English, and the entertainment even included an ice show. The last stop was in Barcelona. We went on a whirlwind tour of several churches, and The Picasso Museum. We even saw  Gaudi's unfinished church, La Sagrada Familia that has been overseen by several architects beginning in 1882 and nears completion in 2026. We concluded with our own walking tour that lasted until nightfall. Like Italy, I wish we had had more time in Spain, but I was grateful for the time spent, and now we had to get ready for Israel.

My husband's cousins were kind enough to meet us at the Tel Aviv Airport, and loan us their car complete with a navigation system so we wouldn't get lost driving to Jerusalem. The only problem was that it was set up in Hebrew. After we eventually found our hotel, we climbed up the 100 steps leading to his mother's apartment.

She lives in a religious neighborhood where we looked as out of place had we been in Amish Country. The men wore black hats and long black coats, and the women wore head coverings or wigs, and long skirts. Occasionally, we would catch a glimpse of a wrist or an ankle. On Shabbat, children played in the street, and adults walked freely with no cars in sight. I thought about all the kids in our neighborhood who would stay inside playing video games on beautiful days, while these children were finding creative ways to pass the hours until sundown.

At 87,  Mrs. Pick speaks Hebrew, Russian, Yiddish, and English. She has a wonderful caregiver who was also born in Russia, and doesn't speak English; yet after a few days we were able to communicate. His aunt lives down the hall, and has two children, and fifteen great grandchildren. We spent a lot of time eating between the two apartments, and went on short walks around the neighborhood, where his mother led the way.

Aside from a visit to the Western Wall, where I struggled to get us through the crowd, while her 70 year old caregiver plowed right in, we didn't spend much time sightseeing, as his mother got car sick. Instead, we had a few excursions to the walker store before taking it for a test drive.

On our last day, his cousins invited us to dinner in Tel Aviv. There we were reunited with family we hadn't seen in years, and introduced to some of their children for the first time. Everyone was warm and inviting. All of his aunt's 15 great grandchildren were there, and I couldn't believe how well behaved they were. Though many of the children don't speak English, our boys managed to communicate with them years ago, through sports and other games. I thought about the four of us  returning before they think they're too old to travel with us. Then I commented on how nice it is to have so many close relatives, and our cousin replied, "They're your family too."

There is so much history along with so many wondrous sights to see in Israel, but this trip was about family. We were both happy that his mother is doing so well thanks to her devoted caregiver and loving family. She was very appreciative that we came to visit, and any ill feelings that we had toward each other were wiped away. I don't know if my mother-in-law will ever think that I'm truly good enough for her son, or good enough for now. 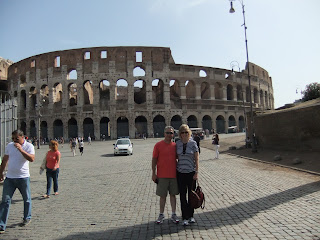 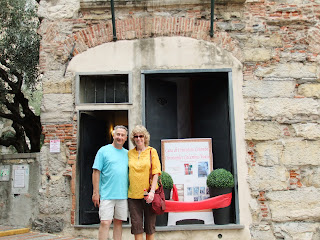 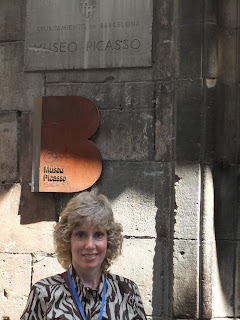 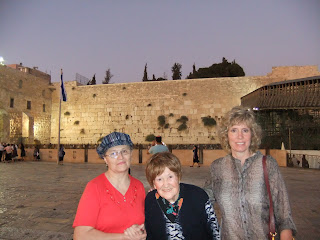 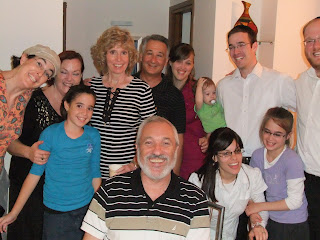 1) Colosseum in Rome
2) Columbus Home in Genoa
3) Picasso Museum in Barcelona
4) Western Wall in Jerusalem (Mrs. Pick is in the middle)
5) With our cousins in Tel Aviv

Posted by Empty Nest Insider at 10:29 AM