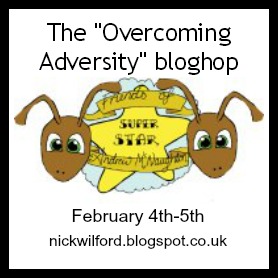 Nick Wilford is hosting the  "Overcoming Adversity" bloghop  where writers are invited to share stories to help raise funds to send his stepson Andrew to a  specialist college. Nick has graciously offered to compile these short stories into an anthology. Thanks to Nick for all of his hard work, and best of luck to Andrew. Be sure to visit the other writers who are joining forces to help Nick's family reach their goals. This is my story.
Tales From The Back Row


Growing up I had my fair share of run-ins with bullies. Recess was always my worst part of the day. When I told the supervisors that older classmates were chasing me, and often tackling me to the ground, they just looked away. Eventually, I took matters into my own hands, and pushed a boy back. He fell on the playground, and had to have stitches. I felt empowered, but not for long.

It didn’t help that I had big buck teeth, and walked like a penguin. My own brother silently terrorized me by giving me the “buck tooth signal” at the dinner table when my parents weren’t looking. Suddenly, I would start crying, and my brother would be innocently eating his vegetables. Occasionally, my dad would just give him a whack although he never caught him in the act.


Years later, I wore braces, and practiced walking with an encyclopedia on my head which alleviated my waddle, but I was still a klutz. Then I joined the school chorus, and finally felt like I belonged.
I continued singing in junior high, and was excited to audition for my first high school play. After I was rejected, I joined the stage crew. There I was reunited with a nasty neighbor. Nothing I did was good enough, and he was hurling insults like a family member. Finally, my brother knocked on his door, and told his father that if he didn’t leave me alone, he would have no choice but to beat up his son. My brother was shorter than him, but more powerfully built. His father nodded in agreement, and they shook on it. This happened at the end of my freshman year when my brother was a senior. From that point on, the boy never bothered me again, and we even became friends.


During my sophomore year, I began taking voice lessons at school, and still had no luck. The following year, my voice teacher suggested that I perform an opera in a state competition. After I won first place, the musical director had a change of heart, and cast me in the chorus of the spring musical. I was finally going to be in my first school play, after three long years of rejection. I didn’t even mind that they stuck me in the back row, because I was tall; though I knew it was because I couldn’t dance.


Sadly, my dad never got to see me onstage. He was hospitalized before my first performance, and passed away about a month later. I’ll always remember the day I came home from school after I made the play. There was a big, shiny silver star on my bedroom door with my name written on it. When I excitedly ran to thank my mom, she was caught unaware. Next, I took a closer look at the star, and saw that the inscription was in my dad’s handwriting.

Posted by Empty Nest Insider at 12:13 AM