How We Were Almost MIA When Our Son Became An Esq. 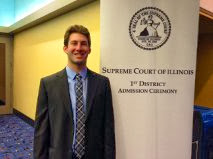 Yesterday our older son was sworn in, and admitted to the Bar. He was presented with his license to practice law, though we were almost not present for the ceremony.

The ceremony took place at the Arie Crown Auditorium in Chicago. It's located at McCormick Place which is where my dad officially became a CPA over forty years ago. I'll never forget driving to the city with my dad, and brother. I was probably nine or ten at the time, and I had a terrible bout of car sickness. While we were all excited about my dad's accomplishment, I never saw the inside of the auditorium.

After I got sick in the ladies room, I thought I'd feel better if I walked around a bit. This worked for a few steps until it began again. Since there wasn't time to make it to the bathroom, I ran to the nearest trash can and missed. I was determined to make things right, so my aim was better on the next try. By the end of the ceremony, I had made my mark in every trash can in the lobby. At one point, I thought a strange man was following me too closely in the deserted hallway. Fortunately, any concerns I had were short lived, as he slithered away when I hit the final barrel.

Afterward, we picked up our grandpa, and went out for a lovely lunch. Of course, I made a complete recovery, determined not to miss a meal. Our older son never heard this story before which made us question the events that followed.

A few weeks ago, my husband did a Google Search on the number of people who passed the Bar Exam when he found an announcement about the admission ceremony. Later we asked our son why he didn't mention it, and he replied, "Because I didn't think it was a big deal. Everyone gets sworn in together, and then it's over."

Fortunately,  my husband found out in plenty of time, and we were able to attend. The Illinois Supreme Court Justices, and Bar Association Representatives gave short meaningful speeches. One of our favorite speakers advised, "Never argue with a fool, because from a distance people will not recognize which one is the fool."

It was very emotional watching our son and over a thousand men and women take the Attorney's Oath at the end of the ceremony. We went out for a quick lunch before we took our son back to work. It made us think about how lucky he was, as many of these lawyers may not even have jobs.

It's a good thing that we won't be arguing this case in court, because the judge would definitely rule in our favor, as sharing this important moment in our son's life was a very "big deal." My husband said it best, "What greater gift should parents have than seeing the return on their investment."


Posted by Empty Nest Insider at 2:13 AM