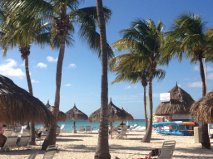 As we were racing to the airport to catch our 5:30 am flight, our younger son asked us to pull over on the tollway. Half asleep, he re-entered the car, and we crossed our fingers that this was an isolated incident. After the second wave of sickness, we anxiously awaited the third strike.
The flight attendant on the no-frills airline was concerned when he saw our boy's green complexion, so he quickly gave him an ice pack for the back of his neck, and a can of ginger ale. When he fell asleep, we quietly thanked the flight attendant who asked, "Nervous flyer?" We told him how he came straight to the airport after celebrating his friend's twenty-first birthday, and he replied, "Well, now I don't feel sorry for him."
We spent our days in Aruba by the pool or white sand beaches. While my husband and the boys were off on a snorkeling excursion, I walked along the beach admiring the beautiful scenery, shops, and hotels.
Our family enjoyed playing catch at the beach or volleyball in the pool. Once when our younger son was playing on my volleyball team he politely advised, "If the ball comes near you, just run away from it."
It cooled off at night which made walking to the restaurants along the strip quite pleasant. After dinner, we would go to different casinos where our older son taught us how to play black jack. He was very patient showing us different strategies, though they laughed at my not so swift hand signals. Our teacher was always a good sport, and was equally happy when any of us were ahead. At one point when I was out of chips, both boys shared their winnings with me, so I could get back in the game. That brought me a little bit of luck, and I quickly returned the favor. Fortunately, like The Gambler song, they knew "when to hold 'em, and when to fold 'em," so no one got too carried away.
As always, our vacation went by all too quickly. For the most part we got along well except for the time when my husband wanted to rebel by wearing his dress shirt untucked. "But it's more comfortable that way, and the kids don't tuck in their shirts." I tried to explain to him that the shirt was too long, and didn't hit him in the right place thus creating an unflattering vertically challenged look. Though I won that battle, he smiled the next night when he wore his sport shirt out.
It poured on our last day as we headed to the airport. The hotel recommended that we arrive three hours before our flight to allow extra time to go through customs. We had to go through customs twice, and the airport was a madhouse. At one point, our younger son had to run to the other side of the airport to buy some food that we ate while standing in line, as we waited over five hours.
Once we boarded the return no-frills flight, the flight attendant apologized for all of the delays, and offered to give us drinks and snacks as long as we paid for them. He even joked that if any of us needed oxygen in case of an emergency, he would gladly give it to us as long as our credit card was accepted.
Though our plane left over two hours late, we still made our connecting flight home. This was quite a relief to all of my boys who were worried about catching the Bears game later that day. Fortunately, they won making our fourteen hour day of travel more bearable. 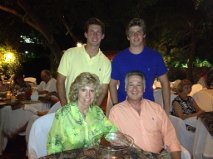 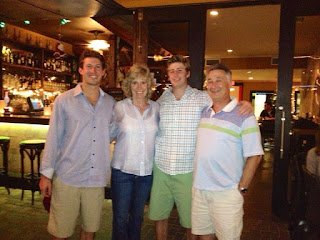 While most people are still clamoring to find last minute holiday gifts, I did some of my shopping early in an unexpected place. When my mom sold her house in September, I didn't have to look further than her china cabinet for some hidden treasures.


Buried behind rows of dishes and glasses in her breakfront, were beautiful platters and figurines. Though she took her favorite pieces to her new apartment, she let me choose from the rest of her collection.


I even set aside some manly bar glasses for our boys. As I was rummaging through the wet bar, I was reminded of the holiday parties we had growing up. My mom would wear her long silky tiger print robe, while she served champagne punch in cheetah print glasses to our guests seated on the comfy leopard couch.


My brother and I would look up at the adults from the rust shag carpeting, before we would race to load up on crabmeat dip, sweet and sour meatballs, and other delicious hors d'oeuvres. My dad was in charge of serving the "real" drinks, when he wasn't carving the turkey or brisket. During the summer, he was known for his expert grilling techniques.


Clean up duty was even fun at family gatherings, because all of the women would work together. My mom and grandma were in charge of putting the leftovers away, while I loaded the dishwasher, and my great aunts would help dry the remaining dishes. I wish that I could remember some of the wonderful conversations that took place back then.


Though my mom had hoped to sell more of her antiques, there were some surprises along the way. As I was packing up her clothes and shoes for charity, I found a beautiful pair of black boots that had never been worn. Enclosed was the receipt dating back to 1997. The next day I tried to return the boots to the department store, and they issued a full cash refund.

Shortly before the closing, I went back to the house for one last look when I found a small white box. It contained a generous gift certificate to a day spa dated from November 1988. I put it in my purse for safe keeping, gathered the rest of the last minute items, and said goodbye to my childhood home.

Recently, I went to the luxurious day spa, and gave the twenty-four-year-old gift certificate to the cashier. I was hoping that it would still have some cash value, and was astounded when she agreed to honor the original amount. I thanked her, and asked her to issue a new gift card, because I didn't want to take any chances.

The other day my mom asked me what I wanted for Hanukkah, and I told her that she already gave me a wonderful present. I reminded her about the gift certificate, and said that we could both share a day of beauty together. Although she liked the idea, she still hasn't forgiven me for replacing her forty-five-year-old shag carpeting.

*Just a note to let you know that I'll be taking a short family break. Wishing everyone a Happy Holiday, and the next time a relative asks you to help them clean out their cupboards, be sure to run right over. 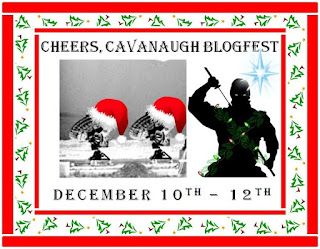 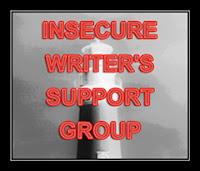 While I was minding my own business, my husband turned to me and said, "Let me see your hands." At first I thought that I had food on them, but I was taking a break from eating. Then I surrendered my hands to him. He looked at them carefully before announcing, "That's funny, according to this online study it turns out that you're a lesbian."

Somehow he had found an Internet article about how your hands determine the type of person you are. While longer ring fingers may indicate athletic prowess, and an aptitude for math, they also show a predisposition to lesbianism. Supposedly scientists at UC Berkeley concluded that finger length and sexual orientation are pre-determined by androgen levels in the womb for women. Usually women's index fingers and ring fingers are the same length. Wait a minute, I'm not athletic or good at math, but could the anonymous researchers at Berkeley be dead wrong about all three? My husband laughed, as my paranoia began to kick in.

A few months ago, I wrote that my friend complimented me on my perfect toes, and now I don't know what to make of my unsightly fingers. What were once considered long and slender, were reduced to lying little stubs. Since it was too late to call anyone, I started frantically searching for hand models online. Surely their index fingers would be slightly shorter than their ring fingers, and this whole issue would be resolved.

Then I came across an interview with a gloved hand model. She spoke about how she wore gloves everywhere, never cooked, or did housework of any kind. Her husband didn't seem to mind, because she was averaging about ten thousand dollars a photo session. I didn't have the patience to see if she finally took off her gloves Gypsy Rose Lee style, so I searched for some still pictures instead. Unfortunately, her flawless hands revealed that her index finger and her ring finger were identical in size. Thus, my dreams of starring as a "Before" hand model on a soap commercial were all washed up. Oh, and I was still a lesbian.

Lately I can't even enter a room without glancing at everyones' hands. My preferences haven't changed though I do spend more time in the garage. Now that I have one more thing to be self-conscious about, at least I'm grateful that this is the season for gloves. In case you were wondering what any of this has to do with  Alex J. Cavanaugh,  I thought it would fit in well with the  Insecure Righties' Support Group