It's time for another edition of the  Insecure Writer's Support Group.  Be sure to visit Alex J. Cavanaugh  and the rest of the talented bloggers who are always willing to lend a helping hand. 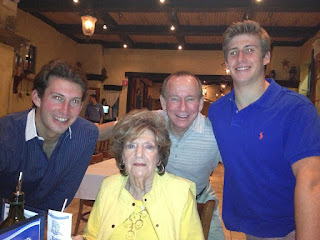 When people ask how I'm doing, I usually respond that I'm sad but okay. Though I lost my mom in January, waves of sadness often come over me even in the most unlikely places. For example, I recently had a small breakdown at a car dealership.

It happened when we got a great deal on a new car that I know my mom would've approved of. It's a pretty shade of blue with chrome accents, as opposed to our last car that blended into every parking lot. But Mom described our old car best. She said, "It's perfect for a retired school teacher."

Because we have such a small family, we had a private graveside funeral, which was not ideal for the frigid and icy Chicago weather. That evening we held a shiva and memorial service where my brother, my two sons and I honored our mom and "Nana" with heartfelt eulogies.

My brother and the boys did a wonderful job and everyone seemed deeply moved. Our friends and family came together to help with the shiva, but someone whom I considered a close friend since our college days, was noticeably absent.

The day after my mom passed away, I phoned my friend, let's call her "Jess." She knew Mom was in hospice through a series of phone conversations and texts. Though she only lives about 20 minutes away, I haven't seen Jess since her daughter's wedding last March.

Jess expressed her condolences and generously offered to help with the shiva. Since we were just having a small gathering, I wanted to handle everything myself. I explained that I was still getting estimates on fish and meat trays. Then she offered some suggestions and offered to call places for me. I thanked her, but reiterated that I would take care of it myself.

She kept insisting on helping me, so I suggested doing what I did for her mom's shiva the year before. After offering to send dinner to her family before the funeral and offering to bring something to the shiva after the funeral, her cousin (aka contact person) said that everything was already ordered. So I offered to make a contribution and brought a check.

For some reason, Jess took offense to this. It didn't seem right to her that I hadn't assigned a contact person, and Jess did not want to hand me a check.

In many instances, women have groups of friends handle shivas like assembly lines where one person orders the food, another collects donations from friends and family, and two or three friends set everything up before the family arrives.

Soon some of my brother's friends also generously offered to contribute, so I asked my oldest and dearest friend Lana (name also protected) to be my contact person.

I texted Jess the next day with Lana's digits. Little did I know that trouble was about to ensue.

The day before my mom's funeral, I could sense that Lana was upset, but she wouldn't tell me why. After much prodding, she said that Jess accidentally sent her the worst text that she's ever seen. I don't know who the text was originally intended for, but Lana was referred to as a harsh expletive. Jess  added that Lana treated her like a "second class citizen" by declining her offer to help set up my mom's shiva.

Lana was merely following my request, as it was held in the entertainment room in our apartment building which has a very small kitchen. My hubby helped me set up as much as we could the night before and Lana helped me set up and clean up on the day of.  My brother's friends were the coffee co-chairs, so there wasn't enough room for anyone else. If only Jess had reasonably expressed her concerns to me, instead of going on the warpath with an innocent messenger.

After receiving the disturbing text, Lana tried contacting Jess. Finally, Jess told her that she sent her the text by mistake and would send the check to me in the mail.

I couldn't sit by and let her treat Lana this way, but I needed to cool off first. Though my brother convinced me to send a kinder, gentler text, my first instinct was to consult my mom. Mom had the ability to handle any given situation and was always the voice of reason.

Later, I texted Jess at dialysis explaining that I heard the news while I was crying and writing Mom's eulogy. I told her that a few days earlier, my mom was unresponsive until Lana came to visit her. My brother was deeply moved when he returned to my mom's room to find her and Lana holding hands and singing songs. Before Lana left, Mom even told Lana she loved her.

I asked Jess not to contribute to the shiva and not to bother showing up, unless she sent Lana a "sincere" apology. I did not want to have any extra aggravation on the worst day of my life. I added that Lana is my oldest and dearest friend, who has been there for me and my family for more than 50 years.

Shortly thereafter, I received a text from Jess saying that she was glad that we saw her original text, because it expressed her "true feelings." She would not apologize for being treated like a "second class citizen," and she knows what it's like to have the "worst day of her life," so she would not be attending the shiva. Jess made it sound like a competition and I clearly chose Lana over her. She wished me and my family well and I never heard from her again. But she still had to send the last word to Lana.

The morning of the funeral. she told Lana she knew she'd show me the text. Jess also wanted to stir things up by adding that Lana's been on my "naughty list" a few times.

How stupid of me not to have realized that my mom's funeral was all about Jess.

Lana continued to apologize profusely for telling me about her confrontation with Jess and I told her that I would've never wanted her there knowing how badly she treated my best friend, and if she was bad mouthing Lana, I could only imagine what she was saying about me.

Lana went above and beyond to help me before, during and after my mom's funeral, and though she and my mom often joked about it, my mom really did think of her as a second daughter. We were also touched that many of Lana's family members also came to pay their respects, in addition to making a generous contribution to the Shiva.

I really don't feel comfortable asking for anything, though my husband would be inclined to disagree. But I was pleasantly surprised when friends and family members generously offered to bring specific things like desserts, candy or fruit. I was also pleased to see cousins that we hadn't seen in years. Just making a condolence call is a gift in itself.

I also received an unexpected gift when I broke the news of Mom's passing to one of my oldest friends, who inspired me to write the ending of my eulogy. She said it was no coincidence that my mom died the same week as Carol Channing and like the Broadway legend, my mom had her own unique style and was "so cool."