Family vacations are supposed to be a learning experience, as well as a time for bonding. This vacation promised to be the best of both worlds; exploring other countries, while also brushing up on our own family history. When we visited my husband's family in Israel almost two years ago, we talked about bringing our boys back with us. This was our last chance before our older son began working full time, and we had to seize the opportunity. Our boys hadn't seen their paternal grandmother in seven years, and they had a lot of catching up to do. First, we had to make a few stops along the way.

We took a cruise from Barcelona with ports in Naples, Rome, Florence, Marseilles, and Majorca. From Naples we went on an excursion to Pompeii; a city that was destroyed when Mt.Vesuvius erupted in AD 79.  It was amazing to see the tiles that remained from the more prominent homes, as well as the original outdoor "barbecue grills," and ovens that were relatively intact. Our tour guide told us how a loaf of bread was found in the oven almost two thousand years later.


Remarkably, two male bodies were preserved beneath the ash, and encased for all to see. Our friends told us to look for ancient phallic symbols that pointed to the brothels, but our guide only singled out one that was carved out on the street. By the time I got through the large crowd to see it, another group descended upon it, and their guide decided to include me in the conversation. This made my children very proud.

In Rome my husband thought we should take the train and Metro to the Colosseum. I thought that we could see more sights if we took a taxi, but he felt that it would be more of an adventure by train. The boys sat  a few rows ahead of us, and struck up a conversation with travelers from another cruise ship. They were disappointed by the food on their ship, so they spent most of their free time dining out. Our older son  hoped that they would have sightseeing tips, as they had previously visited some of our upcoming ports. Instead, they proudly displayed pictures of their favorite meals in Spain and Italy.

When it came time to change trains we frantically ran around the train station. Finally, an older gentleman helped us find our way. Though he didn't speak a word of English, he continued to chat with my smiling husband until we reached the Colosseum. At the end of our tour it started to pour. Then it cleared up on our way back to the train. My husband was thrilled that we found our way. I wanted the boys to have gelato at the Trevi Fountain, see the Spanish Steps, and visit the Vatican, as this was their first trip to Rome. Unfortunately, like my husband the weather didn't cooperate, and we ran out of time.


﻿
﻿
The next day we took a mini-bus with a group from our ship to Florence and Pisa. Florence was delightful  and we had perfect weather. Fortunately, my husband ordered the tickets ahead of time for Michelangelo's David, otherwise, it would have been a two hour wait. We all appreciated the intricate details of the statue which was fascinating from every angle. The elegant shops were surrounded by Renaissance architecture, and I would have loved to have spent more time there.


﻿
This was the second cruise we have taken as a family. The first one was a Caribbean cruise when our older son was a senior in high school. Though the drinking age was only eighteen, he was still seventeen and couldn't go to the clubs or casino with his friends. Our younger son ended up having a better time, as he could play basketball or go on the climbing wall, and still hang out in the teen club. Now our oldest son is twenty-four and his brother is twenty-one, so nothing was off limits on the ship. We always had dinner together followed by a show or a game in the casino, and then they would go off with their new friends while we collapsed.

Our first stop in Israel was to see my mother-in-law in Jerusalem. We didn't arrive until after ten pm, and she still had a full spread waiting for us. Her sister lives across the hall, and they both were thrilled to see us. Our younger son remembered that he had seen photos from his dad's high school yearbook on his last visit, so they started going through other photo albums. It was wonderful watching our boys interact with my mother-in-law, as if no time had passed since their last visit.


﻿ We took a road trip with my husband's cousins to an artist colony in Safed. We saw amazing views from the highest city in Israel which is nine hundred meters above sea level. Since the 16th Century, Safed has been a renowned center for Kaballah or Jewish mysticism where visitors from all over the world including Madonna seek inspiration.

﻿
We also visited the caves of Rosh HaNikra located in the Western Galilee. This is where Israeli and Lebanese officials signed the Armistice Agreement in 1949. Though the boys enjoyed the spectacular sights, they loved hearing about my husband's family history. His cousins were wonderful hosts who filled the car ride with fascinating stories about where their parents, grandparents, aunts and uncles fled after World War II, and how they eventually settled in Chicago only to return to Israel after their children had families of their own.

﻿
Though my husband's aunt has only two children, she has eighteen great-grandchildren, so most of them were busy taking care of their young families. His cousin even tried to fix up our older son, but I think my mother-in-law realizes that it will be very difficult for them to come close to reaching that number. It was still nice catching up with the handful of cousins who were available.

If you ask my sons what their favorite sight was on the trip, they'll tell you watching their ninety year old grandmother who only weighs around eighty five pounds, eat a six course meal with gusto. She is very serious when she eats, and will only consume healthy foods in a particular order to promote good digestion. Who knew that we would be able to accomplish so much without ever leaving my mother-in-law's dining room table? 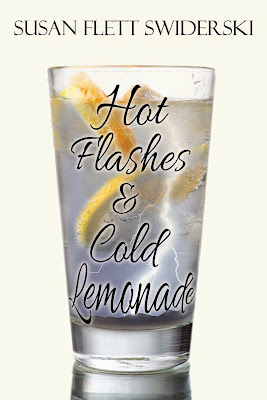 When I began reading blogger friend  Susan Flett Swiderski's  Hot Flashes & Cold Lemonade, I was immediately drawn to the opening scene where Pearl's father drives away with a mysterious stranger leaving her oddly accepting mother behind. I quickly read on to find out her father's motivation for leaving, but the author slowly takes us there on her own terms introducing us to Pearl's colorful friends and family along the way.

Hot Flashes & Cold Lemonade is the perfect title for a story that unwinds easily like a warm summer day one moment, and turns stormy the next. Pearl is a multifaceted character who can make you laugh hysterically and cry like a baby when you least expect it. I'll never forget the heart-rending scene where her successful son invites her to a dinner party. She always puts her family first which often comes back to haunt her.

Susan Flett Swiderski's novel is something that we can all relate to. Each character has a new layer that is slowly peeled away throughout the story. For example, Pearl's mother and husband have a special relationship that Pearl doesn't even begin to appreciate until later in the novel. She is so busy trying to be a supportive wife and mother that she forgets to be a more accepting daughter. We all struggle with these issues at some point in our lives.

I was sad when  Hot Flashes & Cold Lemonade  came to an end, not because I was disappointed with the ending, but because I didn't want to say goodbye to this wonderful family. Susan's quick wit, and attention to detail made me want to spend more time with these amazing characters. It also made me appreciate my own family, flaws and all.

IWSG: The Skinny on Flying

It's time for another edition of   Alex J. Cavanaugh's Insecure Writer's Support Group.  Be sure to visit these talented authors who are always willing to lend a helping hand.


Our flight back from Israel was a long one, so my hope was to get some writing done on the first leg of our journey home. We got off to a bad start when they made us check one of our carry-on bags. It had no problem fitting it in the storage bin on our flights to Spain and Israel, which meant that we were destined for a smaller plane.

The Airbus looked like a propeller plane, and the space was so tight that we couldn't even roll our remaining carry-on bags down the aisle. We left for the airport at two fifteen for a six a.m. flight, and barely had time to spare. It didn't help that we were stuck like sardines for five hours, and still had to connect with another nine and a half hour flight in Madrid. I thought a good movie might help settle my nerves, but there wasn't enough room to accommodate a small screen.

I sat with our two sons, while my husband was across the aisle. His seatmate couldn't even pull the tray table down over his protruding stomach. This made me think about why these tiny planes don't have more specific passenger requirements.

Before we boarded the plane we had to make sure that our belongings fit into the metal carry-on baggage template.  Is the next step to have passengers try to fit into similar contraptions, and charge them accordingly for excessive baggage? Should travelers be divided like cattle encouraging the largest ones to roam freely in first class, the borderline in business, and the scrawniest in coach?  I thought of a few other suggestions that I wanted to jot down, but I was too worried to pull down my tray table.