For The Sake Of Arguing

The phone rang just as I was about to leave the house.
Mom: It's raining hard now, so you don't have to take me to physical therapy.
Me: But it was raining earlier.
Mom: Yes, but I'll just cancel my appointment. That way you won't get wet.
Me: You weren't worried about that before. I told you I don't mind. Besides, I made you lunch and didn't you want to go shopping first?
Mom: Yes, but it's too much trouble going back and forth in the rain.
Me: It's not coming down as hard now and don't you think you need the therapy to get stronger?
Mom: Well if it's not too much trouble.

Later that afternoon my mom told me that I really should be more patient.

This made me think about other ridiculous arguments I've had throughout the years. Shortly after I started driver's ed, my dad suggested that I drive to work. As I was pulling out of the driveway, my mom came home. She hopped in the back seat, while my dad sat by my side. All was calm, until I had to make a left turn without an arrow. My dad was telling me to be assertive and speed up before the light changed, while my mom was telling me to slow down. Instead, I got so nervous that I backed out of the intersection and waited for the next light. Needless to say, neither of my parents volunteered to take me driving again.

The summer my younger son turned thirteen was during travel baseball season, so we decided to have a little celebration after the game. We ordered pizzas, and brought a cooler filled with soft drinks for the team. Earlier that evening I asked my husband to pick up a few bags of ice for the cooler at McDonald's. He asked me how much it would cost. I told him 99 cents a bag. Then he wanted to know how much other places in the area were charging. I assured him that 99 cents was the best rate in the Chicagoland area  and that if he wanted to miss his son's birthday to scout for 97 cent bags of ice in Wisconsin, I'm sure that he would understand. Of course, he still had to make some calls just in case there was a fire sale on ice at the end of July. It took me a long time to thaw out from that whole experience.


This is a repost from November 2011. In a few days we will be visiting my mother-in-law, so I'll have limited Internet access. I look forward to catching up with everyone at the end of the month. 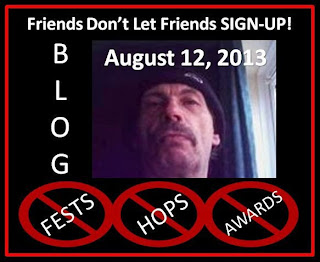 Today bloggers from all over the world are celebrating a man who has a heart of gold and a tongue for sarcasm at the Anti-Blogfest Gary Fest. He will support his fellow bloggers as long as they don't bestow him with awards and try  to elicit him for blogfests. That is why Mark Koopmans,  Alex J. Cavanaugh,  Tina Downey,  Robyn Alana Engel,  and  Morgan Shamy  are doing it anyway. To salute our dear friend I've attempted a play on words; though no one can truly match the unique genius of Gary Phillip Pennick.

Where bloggers are forced to guess the subject matter based only on the following comments: Great post!  Fab photos!  Happy weekend!

For every wrong answer they lose a comment on their own blog. If they still don't get it after three tries they lose a follower. Alex J. Cavanaugh is banned from this blogfest as he has the unfair advantage of always being right.

For example:  Today I wrote 1500 words for my WIP:  500 words at breakfast; 225 words when I was brushing my teeth; 475 words when I was driving my kids to soccer practice and 300 words while I was in the tub with the pool boy. I'll decide on a theme once I know what a WIP is.

Loved, loved, loved so and so's book even though I haven't read it yet! It's on my TBR (To Be Read) list on my TBD (To Be Dusted) nightstand next to my TBM (To Be Made) bed.

Yesperate To Participate In All Blogfests Blogfest

According to Urban Dictionary, "Yesperate is the condition to be desperate to please, resulting in 'yes' responses to everything regardless of the reasonableness of the 'yes' responses."  Enough said.

Put them all together and they spell Gary. Though he will be the first to tell you that he's not all together, it never stands in Gary's way of being one of the smartest, wittiest and most thoughtful bloggers I know.

Wanting To Be In Two Places

I will be interrupting the Insecure Writer's Support Group to share a personal story. Be sure to visit  Alex J. Cavanaugh  and the rest of the talented members.

On July 21 we received word that my mother-in-law was rushed to the hospital in Israel. She was unconscious, and was put on a ventilator. The doctors ruled out a stroke, and began treating her for an infection of unknown origin. Our cousins were wonderful about staying by her bedside, and keeping us apprised. When her condition wasn't improving, my husband made arrangements to fly out to see her.

In the meantime, his younger brother was suffering from liver failure. The cancer began in his colon six years ago, and had spread to his lymph nodes, liver and lungs. Though he was in a great deal of pain, he never complained, and agreed that it was important for my husband to leave the country to be with their mother.

We saw his brother the day before my husband left for Israel. He seemed happy to see us, and even joked around a bit. Our sister-in-law told us that they were going to Michigan for the weekend. We reminisced about some of my brother-in-law's major accomplishments, as they were in a family business together for more than thirty five years. When he went to take a nap, I asked his wife if my husband should postpone his trip to Israel. She felt badly that he was put in this position, but encouraged him to see his mother.

I offered to go with my husband or in his place. Because our older son was busy studying for the bar exam, and our younger son was getting ready for summer school finals, my husband thought that I was needed at home. After he arrived, he phoned to let us know that my mother-in-law was improving. He also received a reassuring email from my sister-in-law stating that his brother was feeling a little more like himself.

When I called to check-in later the following day, a close family friend told us that his condition had worsened. My brother-in-law had to have his abdominal cavity drained for the second time in two weeks, and he was sleeping from all of the medication. They seemed to be exhausted, so I said that I'd bring our boys over on Saturday.

Because there is an eight hour time difference between Chicago and Israel it was already Shabbat there. My husband's relatives are very religious, and will not speak on the telephone or use any electronic devices from sundown on Friday to sundown Saturday. I was frantically trying to reach him early Saturday morning, but he never got the message at the hotel. He was with his mother in the hospital where they also observed Shabbat,

In the midst of all of this, my son was moving into a new apartment. His plan was to set everything up, so that he could be closer to where he was taking the bar exam. I finally was able to reach my husband when Shabbat ended, and asked him to come home as soon as possible to see his brother. He also felt terrible and was waiting for his mother to be released from the hospital.

I tried to prepare our sons, but their once exuberant uncle lay jaundiced and weak in a hospital bed in the bedroom he shared with his wife. He tried to sit up to greet us, but he just didn't have the strength. I told him that he was the bravest man I knew, and that he didn't have to be brave anymore. My sister-in-law and nephew were also in the room with us, and we all fought back the tears.

My husband booked an earlier flight home, and was scheduled to arrive on the first day of our older son's bar exam, which was also our younger son's birthday. While I was scrambling the night before to buy him a birthday present, I came home with two right shoes.

Sadly, my husband didn't make it home in time.  At the airport, I gave him the horrific news that his little brother had passed away earlier that morning.

My brother-in-law was a wonderful man who went out of his way to make everyone else feel comfortable during his illness. He always greeted everyone with a joke and a smile. His dear friend did an exceptional job capturing his spirit in his eulogy. We sat with the rabbi telling stories with our sister-in-law, niece and nephew which helped in the healing process. In one day, my husband lost his brother, business partner and best friend.