The Fools Of The Road

Recently, we were driving into the city for dinner with another couple. We were seated Flintstone style with Fred and Barney in the front, and Wilma and Betty in the back. All of a sudden, a car that didn't have its headlights on started to pass us. I encouraged our friend to signal the driver by honking or flashing his lights. He simply ignored my suggestions, as he and my husband continued their conversation.

On the way home, another incident occurred. This happened on the expressway while he was trying to change lanes. The two hot rods were going head to head to prove who was King Of The Road, and our friend was determined not to let this young punk take over his title. As Wilma and I were hanging on for dear life, Fred and Barney were conspiring to teach this guy a lesson.

After we knew we were out of danger, I brought up dinner, and maybe a bit of lunch, before I said, "What's the matter with you Fred, and Barney you're just as guilty. How can two grown men with families waste all this time drag racing with a maniac, when you couldn't even help another driver who forgot to turn on his lights?"

Then Fred replied matter-of-factly, "That guy was just playing a twisted game. He purposely drove without his lights on, so that the first person who flashed his lights would become a moving target for them to shoot. How could I risk getting us all killed?"

Barney said that he had also heard stories about those gang related shootings. I said that the whole thing sounded absolutely ridiculous, and that by signaling to the driver it could prevent future accidents. The subject quickly changed, and Fred had us all laughing the rest of the way home.

The next morning, I was rummaging through the Sunday paper when something interesting caught my eye. I grabbed my husband, as we called our friends to tell them to pull out the Motormouth Rides section of the Chicago Tribune. Coincidentally, someone else  was reluctant to help drivers who didn't have their lights on for the very same reason that Fred had mentioned. This was Bob Weber's (Motormouth) response:

"This is an urban legend that, as far as I could find, goes back to 1993. Despite such stories bouncing around, this is not part of a gang initiation. Please don't let unfounded rumors prevent you from being a good Samaritan."

Fred and Barney were also surprised to read this article only a day after the incident had occurred. Hopefully, this will result in them becoming more courteous drivers, instead of acting out their road rage. At least they both said, "You were right Julie, I mean Betty." I think "You are right," is the new "I love you."

The Dirt on Cleaning Appliances


I'm not just writing this blog, I'm cleaning my dishwasher and washing machine. My dishwasher has caked on residue from excessive powder buildup. For some reason the liquid detergents, and time released tablets don't dissolve in my dishwasher, so I've been using the old fashioned powder formula. It's reached the point that my younger son even commented on how awful the inside looked, and generously offered to clean it for a small fee. Remarkably, my dishes are still coming out clean, and no one has dropped dead at this writing.

My washing machine is also causing strange problems. The dark colors come out fine, but light colors often come out with a single brownish line, even when they're washed inside out. The manufacturer told me to wash the machine out with bleach which only works for a few loads until it sneaks up on an unsuspecting white shirt.

Currently, I'm washing out both machines, which is probably the equivalent of putting on a band aid. My hope is that I won't have to replace either machine for as long as possible, or at least until April. Yes, my motives are purely selfish. My birthday is later this month, and I don't want an appliance as a present. I still haven't gotten over the Dustbuster my husband bought me, after our younger son was born.

According to U.S. News,  "Falling is the leading cause of home injury deaths; it claims nearly 6000 lives per year. And although there are ways to reduce this risk, the president of the Home Safety Council recommends that homeowners install grab bars in their bathtubs and showers."

The Cato Institute Handbook For Congress reported in 2009, "One's chance of being killed in a terrorist attack is many times less than one's chance of drowning in a bathtub or being killed by a fall from scaffolding or a ladder."

A 2008 study in Today Health, "...found staphylococcus bacteria, a common cause of serious skin infections, in 26 percent of the tubs tested, as compared with just 6 percent of garbage cans. Tubs typically had more than 100,000 bacteria per square inch."

None of this mattered, as a man in his mid-late forties from Oklahoma City was enjoying his bath a few days ago. His mom was off in the kitchen making a sandwich when she heard the loud boom. Next, she felt the house shake, and feared an earthquake hit. Then she heard the loud screams coming from the bathroom.

At first she couldn't even find her son trapped under all of the rubble. The tub and the toilet were completely demolished. The driving force was asleep at the wheel of a Volkswagen Jetta.

After firefighters dug out the bather, and carried him out on a stretcher, it was reported that he only suffered from a large gash on his leg. The 25 year-old driver miraculously had no injuries when he crashed full throttle into the brick house, as a result of staying up all night. Apparently, he credited his complete state of relaxation to remaining unscathed.

After he pointed out, "I wasn't drunk, or anything obviously, and I'm awake now," the police handed him "an energy drink and a ticket for distracted driving." Then he set off for his nearby neighborhood home.

And you thought it was bad to bathe in your own filth. Thus far, there has been no word on the whereabouts of the victim's rubber duckie.

When IWSG and A to Z Collide

It's time for another edition of  Alex J. Cavanaugh's, Insecure Writer's Support Group. Be sure to visit this encouraging group of bloggers. This year, the first Wednesday in April coincides with the letter "B" in the  A to Z Blogging Challenge. Although I won't be participating this year, I'd like to offer some suggestions on how to creatively combine the two. 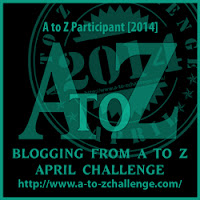 Three year participant Al Penwasser will also not be part of the festivities this year, in order to work on his hilarious new book. However, he mentioned that he might re-post some of his favorite alphabet stories. This reminded me of my three posts for the letter "B," and how they would fit into the IWSG.

In 2011, I wrote about Battling Bulges. As writers, we often need to trim the fat from our stories, before we become overstuffed on adjectives, and run-on sentences.

The following year was all about the Brutality of Bra Shopping. Many readers are in search of an uplifting experience, and it's our job to provide it for them. Though sometimes it's difficult to find the perfect fit, especially when our audience outgrows our material. Somehow that didn't happen in our YA days.

Last spring, my topic for "B" was on Beauty Shop Bullies. This subject provides three options for the IWSG.  Bloggers have their choice of beauty shops, bullies, or both. Though I can't imagine anyone else has encountered an eighty something year old bully at their mother's beauty shop. There are bullies who do try to discourage us from writing, and there are plenty of writers who are insecure about their hair. Although we can all agree that Alex, and Arlee are a cut above the rest.

I look forward to cheering on the wonderful A to Z blogging community. I'll never forget my very first challenge in 2011. It was shortly after I started blogging, and I had no idea what to expect. When I told my mom that I was going to be extremely busy that April, she replied without missing a beat, "I'll try not to die this month." Thankfully, she kept her promise.