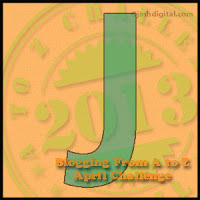 Jim's jalopy stalled outside the joint,
Jukebox playing their favorite tune.
Juleps ordered at the bar,
Jumpy as he waited for his June.


Jitterbug contest just announced,
Jessie gestured for Jim to take her hand.
Jovial as he politely declined,
Jealous he refused to be her man.

Jaws dropped as men eyed the sultry stranger,
June ran into his outstretched arms.
Jim felt like time stood still,
Joyful as he drank in all her charms.


Jilted Jessie aimed to pull the trigger,
Jigsaw pieces scattered in the hall.
Janitor swept up what was remaining,
Jury's still out on the final call.

Email ThisBlogThis!Share to TwitterShare to FacebookShare to Pinterest
Labels: A to Z Challenge, jilted woman