Yodeling In My Yaktrax 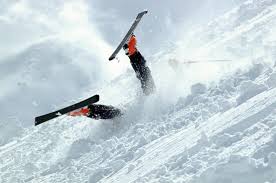 I'll never forget our first family ski vacation. My husband wanted to start our boys out early by skipping the bunny hills, and heading out to the more challenging runs of Park City, Utah when they were three and six years old. While they were learning the ropes in ski school, he took me on some beginner runs. That was when I first realized he was a liar. The green "beginner" runs out West were much more difficult than the green runs in the Midwest, and I was petrified.

Rewind to my first ski trip with my best friend, and her brother when I was seventeen.  We had a special weekend package in Michigan that included lessons. My first lesson was an hour long and my instructor ditched me after twenty two minutes. He said that I was too dangerous to ski with. I'm not really sure what bothered him most. Was it when I fell on him getting off of the chair lift causing a domino effect behind us, or was it when I couldn't control my speed forcing others to fall as I miraculously made it down the hill?  Later, I fell down so many times that I looked like the Abominable Snowman. People were terrified to ride on the lift with me. Thanks to my blow dryer, I was virtually unrecognizable as I danced the night away.
Back in Park City, my kids weren't as excited about skiing as my husband was. My three year old even went sleep skiing in between my husband's legs. We have a video of my older son smoothly skiing off of the chair lift, while I did a graceful belly flop into the snow. My boys were quickly learning, as I was growing more fearful. Though my husband was teaching me how to control my speed by turning; the minute I felt I was losing control I would fall down. I don't know how many times my family skied passed me, while I was stranded with one ski in the middle of a snowdrift. I yelled for help so loudly that I was worried I'd start an avalanche. I also yelled out a few unkind words to my husband.

It probably was no accident that he led me to an abandoned run, but they eventually came back for me. When the boys heard my screams, they asked why I was so upset. I told them that I was just practicing yodeling; while I was making an obscene gesture with my ski pole at my husband.

Posted by Empty Nest Insider at 12:02 AM

Email ThisBlogThis!Share to TwitterShare to FacebookShare to Pinterest
Labels: A to Z Challenge, family ski trip, Yodeling In My Yaktrax