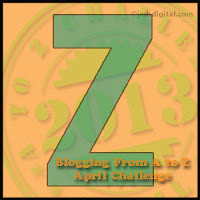 Zaftig Zelda longed for romance,
Zhlubs just got in her way.
Zoster held her in tight,
Zephyr Bar was having Ladies Day.


Zoologist came to greet her,
Zebras zig-zagged on her skirt.
Zibibs flowing at the bar,
Zelda quickly began to flirt.

Zach admired all her tails,
Zingers flying through the air.
Zayde told him he would find her,
Zealously searching in his prayers.


Zip Car drove them to his grandparents,
Zelda couldn't see a thing.
Zach guided her with his flashlight,
Zoodikers could that be a ring?!


Zadie and Bubee started cheering,
Zaftig one was getting dressed for the feast.
Zounds abounds at the graveyard,
Zombies drooled at the zesty beast.

Just as one chapter ends, another begins. Instead of waiting until the official IWSG meeting tomorrow, I thought I'd address my insecurity today. This is my third "Z" poem for  the  A to Z Challenge  and I'm a little anxious about it.

The problem is that I wanted to include words that I hadn't used or even heard of before. This raises the issue of clarity, so I'd like to use this opportunity to provide some definitions in order of appearance.

zibis - an alcoholic drink made from raisins

My grandpa once told me to keep a dictionary at my bedside. That way if I came across a word I didn't know, I could look it up without losing my train of thought. This was sage advice, and the Internet makes it even easier to do so. Consequently, problems may arise as some words have different spellings. For example, zhlub is the Yiddish spelling of schlub. Schlubs are just as annoying as zhlubs, but the "Z" version worked best for the poem.
.
Perhaps  The Insecure Writer's Support Group  could shed some light on this matter. In the meantime,  I want to thank  Arlee Bird,   Alex J. Cavanaugh,  and the rest of the  A to Z Challenge  co-hosts, and minions for another amazing April. I could go on and on, but I'm oysgematert (exhausted).

Posted by Empty Nest Insider at 12:12 AM