I dug up this commercial from a media writing class in college. I remember that I kept drawing a blank for this project. When I realized that it was due the next morning, I called my mom in a state of panic. It was a long distance call which was very expensive at the time, and my mom was in the middle of watching Dynasty on TV. Fortunately, she calmed me down, and helped me come up with the title which made the rest easy. My professor really liked it, and gave me an "A."  Sadly, others must have questioned his generous grading system, and I never saw him again; though my mom still remains my best and worst critic. 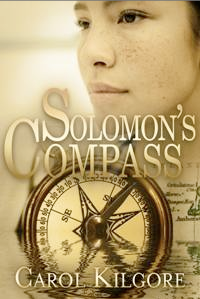 I'm delighted to announce the release of Solomon's Compass by Carol Kilgore. Take it away Carol.
A missing belt -- her uncle's prized possession. The lure of buried treasure. And a sexy former SEAL who makes U.S. Coast Guard Commander Taylor Campbell crazy. What more could any woman want. Right?

Taylor is in Rock Harbor, Texas, on a quest to unearth her uncle’s treasure—a journey far outside the realm of her real life. There’s one glitch. Taylor's certain the buried treasure was all in Uncle Randy's dementia-riddled mind. Now he’s dead.

Former SEAL Jake Solomon is in Rock Harbor under false pretenses to protect Taylor from the fate that befell her uncle and the other members of a tight circle of Coast Guardsmen called the Compass Points who served together on Point boats in Vietnam.
Jake is definitely not supposed to become involved with Taylor. That was his first mistake. Taylor is attracted to Jake as well, but she refuses to wait for him to locate the killer when she knows her plan will force her uncle’s murderer into action.
But the killer's actions are just what Jake is afraid of.
SOLOMON’S COMPASS is available at Amazon in paperback and Kindle

Carol Kilgore writes a blend of mystery, suspense, and romance she calls Crime Fiction with a Kiss. Always at least one crime; always a love story. You can find her here: