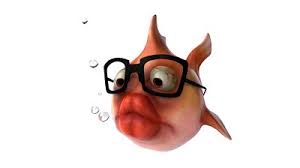 When our youngest son was in kindergarten, we attended a school carnival where he was awarded a tiny goldfish for winning at ring toss. We proudly carried him out in his baggie, and set out to purchase his starter home. Sensing his loneliness, my boy suggested that we find him a roommate. When there were two, they were known as Red Spot and Gold Dot respectively.

By the time they moved into their third residence, Red Spot had passed on and Gold Dot continued to grow bigger and stronger. Once we arrived home from a ten day vacation, and found the automatic fish food feeder had broken, but Gold Dot was still going strong. This miraculous orange fish grew larger than any goldfish we had ever seen.

When my son was a freshman in high school, Gold Dot miscalculated his leap from the tank to the bowl during bath time, and ended up on the kitchen floor. I was wearing my slippery dishwashing gloves, and called my husband for help. He saw the fish wiggling on the floor and simply stated, "It's his time," and walked away.

My son came running into the room in tears, so I yanked off my gloves and swooshed him back into the water. Then he saw something red in the water and yelled, "He's bleeding! He's bleeding!" So I put him into the smaller bowl, applying pressure to his wound by using a napkin as a tourniquet.


Meanwhile, my husband added, "There's nothing you can do. He had a long life." My significant other's comments were especially comforting considering he's in the healthcare business. It really made me reconsider having a living will, "Indigestion, nonsense! It's her time."

Fortunately, Gold Dot survived physically: mentally we're not so sure. As my son tells the story, his dad was the hero who saved his favorite goldfish after his mother carelessly let him jump out of the tank.

Posted by Empty Nest Insider at 12:39 AM

Email ThisBlogThis!Share to TwitterShare to FacebookShare to Pinterest
Labels: A to Z Challenge, goldfish