A Warm Escape On Winter Break

Aside from college and law school visits, we hadn't gone on a family vacation in over five years, so we were looking forward to relaxing in Nuevo Vallarta. We arrived early at the airport in anticipation of holiday crowds. While we were going through security, we removed our shoes and belts and placed them in the baskets on the conveyor belt. My husband and my two sons added their phones and wallets next to my purse. As they were putting their shoes back on, I grabbed my husband's phone and wallet before I left the line. Shortly after, he realized his belt was missing.

We went back in line to check with security, but there was no sign of his belt. Hubby hadn't packed a spare, and I feared that his Dunlap's Disease would cause his pants to "done lap" down to his ankles. Fortunately, we found him a replacement at an airport kiosk. For the low price of $12.99, he was able to keep his pants on without losing his shirt, not to mention his new love of pleather.

This was the first time that we traveled to a warm climate in the winter, since our boys started grammar school. The few times that we did get away were for ski trips when they were very young. I was thrilled not to worry about skiing into a tree, but with this trip came other worries. Death by food poisoning, sun poisoning or gunfire were at the top of the list. We were armed with Hepatitis A vaccines, 45+ sunscreen, and we didn't venture too far from the resort.

We stayed at an all inclusive resort that provided unlimited food and drink including a fully stocked bar in each room. This was our first trip where my 20 year old son could drink legally, fortunately, he had his older brother and roommate with him, so I knew they would look out for each other.

By day we would play volleyball in the pool or at the beach. One day my younger son went parasailing right on the beach. The Three Amigos also went zip-lining, and swimming with the dolphins. The weather was always sunny and between 80 - 82 degrees, which was perfect for long walks on the beach.

We took a taxi to the Old City in Puerto Vallarta to have dinner and walk along the boardwalk. There were flea markets, performers, restaurants, and clubs with all of the glitz of a mini floating Las Vegas. We walked along cobblestone streets that felt like we were transported back in time.

Though I'm not supposed to spend a lot of time in the sun, I was hoping to get some color. I ended up with red blotches in the corner of my nose, between my upper lip and the tip of my nose, and a red streak on my collarbone . To even things out, I contracted pink eye. This occurred on the day before we left, so I couldn't join the family in the pool, but hubby and I still took one long last walk on the beach together, while the boys played basketball.

On our last night, we dined at an Asian restaurant at the resort. Toward the end of dinner, our younger son loudly let out an inappropriate word. While I was reprimanding him, I noticed blood was trickling down his nose. Then we noticed the weapon lying on the table. Several feet away, a piece of a broken dish somehow flew into the air, and landed in between my boy's nose and upper lip; around the same location as my now peeling sunburn. Within seconds, the waiter came over with napkins, and an alcohol swab to stop the bleeding. Shortly after the host, manager and security medic arrived on the scene. He was examined, and bandaged in time for dessert. Apologies were given in Spanish and in English. Then we adjourned to another location to play cards, before they went off with their new friends.

We left Nuevo Vallarta relatively unharmed substituting gunfire for porcelain pellets, and conjunctivitis for hepatitis.  Our boys didn't seem to mind spending time with us, and were very appreciative. We arrived home on Christmas Eve, which was also the fifth night of Hanukkah. Our greatest gift was the satisfaction in knowing that we really like the young men our sons have become. 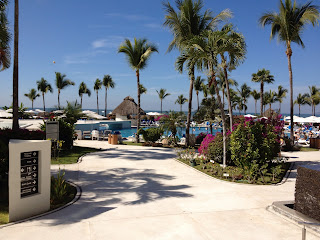 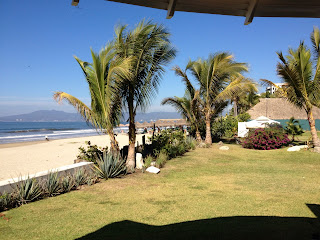 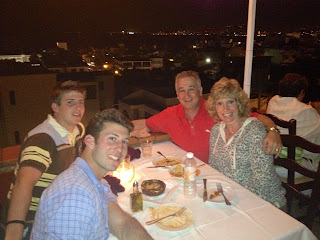