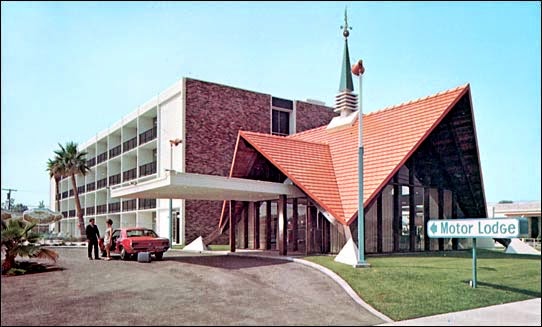 Recently I watched an earlier episode of Mad Men which took place at a Howard Johnson Motor Lodge in the sixties. This brought back memories of childhood vacations. Our dad was vice president and comptroller for a large corporation that had a plant in Newark, Delaware. We spent many summers driving from Chicago to Newark at the Howard Johnson's where we enjoyed leisurely days at the pool, while our dad went to work.

Afterward, he would go swimming with us, have races, and take me for rides on his back. Our mom enjoyed sunbathing, and would occasionally walk in the water up to her knees.  We were warned not to get her hair wet under any circumstances. Children who accidentally splashed her were never seen again.

Our dad also delighted in taking us out for hot fudge sundaes, or the flavor of the month special at HoJo's.  Hot apple pie ala mode with chocolate ice cream was also a favorite he shared with my brother. We never made a visit without going to a barbecue hosted by his associate's family who became dear friends.
The only downside were the long drives to and fro. I suffered from motion sickness, and never failed to have my dad pull over several times throughout the trip. In the meantime, my brother would be quietly turning blue with his legs crossed, and tears streaming down his face. All because he didn't want to ask our dad to make anymore unscheduled stops.

Our last vacation to Delaware was when I was fourteen years old. As an added bonus we drove on to a resort in the Catskill Mountains. It was a cleaner version of the one in Dirty Dancing. By day my brother and dad played a lot of tennis, in addition to swimming and playing volleyball with us. By night we went to see shows, or went dancing in a lounge with a live band. As always the vacation went by all too quickly.
Although our dad didn't feel well, he insisted on driving straight home like he always did. Mom suggested spending the night in a motel, or at the very least she would drive, but he wouldn't hear of it. Dad drove through the night, dropped me off at home, and headed to the hospital with my mom and brother.

It wasn't until the next day that I found out Dad had a heart attack, along with latent malaria which he must have contracted in the Navy. Mom assured us he would be fine, so I didn't worry. My brother was smart enough to know better. This was Dad's second out of three heart attacks, and he was only forty six years old.
One of our last family trips was when I was a high school sophomore, and my brother was a college freshman. My brother fixed me up with his friend who needed a date for a Naval ROTC formal. I could have taken the bus to Wisconsin, but Dad offered to have us stay at a hotel, and make a fun weekend out of it.
My dad probably wasn't feeling well at the time, but he never complained. He was so proud of my brother and delighted in visiting the beautiful campus, because he never went away to school. He also loved when my brother joined a frat, as he was president of his fraternity.

I had a great time at the Naval ROTC Ball, which my dad took pleasure in having been a Naval officer. More importantly, I enjoyed the family time that we shared. Sadly, I didn't realize how precious it was. Although he didn't say it often, these special family outings were our dad's way of showing how much he loved us.